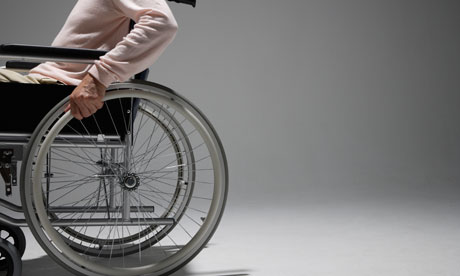 Liam is one of the most charming, engaging and sociable people I’ve ever met. He doesn’t use words to communicate but that doesn’t stop him from becoming the centre of attention whenever he enters a room. His mum, dad and granddad are incredible. As a family the love they have for one another shines from them and it is a huge privilege to be able to spend time in their company.

Liam’s name is not Liam. His family live in England but do not want their location or identity to be known as they fear that by sharing this story their future care will be impacted.

Liam had surgery in May 2013 on his hips and pelvis. It has taken him a long time to recover from the surgery and recently he has been provided with a new wheelchair.

Liam, along with his mum and dad, had always been supported by a particular seating company. They had come to know one another well and had developed a good working relationship. This company recently lost the contract to supply wheelchairs in Liam’s area.

The wheelchair service asked Liam and his family to come in for an assessment. Time was taken from school and work for the appointment, arrangements made for everyone to be there as getting the right wheelchair is a high priority. The seating options for Liam were discussed – a plan was made by people that know him well, a custom contoured foam carve seat with a separate, dynamic modular back. Everyone knew the stakes were high as Liam’s spine is changing shape and there has been talk of surgery. Liam faces many challenges in life and his family are desperate to avoid the additional challenge of spinal surgery.

At the next appointment to cast Liam for the new seat his family were surprised to find that his therapist was not present. Two seating specialists from the new company, neither of whom know Liam or attended the previous appointment decided, with no consultation, to cast him for a one piece custom contour mould – despite protests from his parents they went ahead and did this with the assurance that if the seat wasn’t right the process could be started over again. There was no assessment of Liam’s body shape or his range of movement at this appointment. He was simply hoisted out of his old chair, into a casting bag and the cast was taken. What was the point of the previous appointment? How is it possible to prescribe such a vital piece of equipment with no assessment?

The result was a chair that Liam cannot sit in. He has obvious limited flexion in his left hip – the chair does not accommodate this and so forces his pelvis up on his left. In this chair his lower ribs are in contact with his pelvis, simply sitting in the chair causes considerable pain. Every bump in the pavement, every door jamb, every curb causes him to cry out. Watching his granddad push his chair whilst apologising for every bump is heartbreaking. He can sit in the chair for no more than an hour and a half. He can’t go to school. As soon as he is made to sit in his chair he is quiet, he shakes his head in distress and he cries out. His parents apologise, promise he won’t be there for long and continue to search for an answer. He has had the chair for 5 weeks.

The new company made minor adaptations, Liam was still in agony. Liam’s parents were told that if he were unable to tolerate the chair within a couple of weeks they would need to look at “more holistic pain management” – were they seriously considering sedating this young man rather than getting him the right wheelchair.?

Liam’s family had to seek an independent assessment in order to have some support to argue against the harm being done to their beautiful son. Further adaptations have now been made – they are a stop gap, a bodge, a fudge, but they mean Liam might be able to go to school for short periods. The whole process will now start over, time will be taken from school and work for the appointments, arrangements made for everyone to be there as getting the right wheelchair is a high priority. The family have lost faith in the service and are trying to secure a personal health budget in order to have more control over Liam’s life.

How much has this fiasco cost? Financially, many thousands – in human terms harm has been done to a stunning, charming and vulnerable young man. There is much to be done in the world of wheelchair provision…

We are a group that celebrates the positive choices of those who have decided to work as Learning Disability Nurses. We meet yearly at conferences that are hosted by Universities across five nations who volunteer to support and host the organisation. We use fundraising to ensure that the conference is free to all students, and are supported by movers and shakers in the Learning Disability World, employers, and most importantly by people with a Learning Disability.